Extended docks show how far the Sea of Galilee is below its former fill line. See the row of houses in the distance? Twenty years ago, the lake reached them!

Visit the Sea of Galilee today and you’ll certainly want to ride one of the “ancient boats” that take tourists out on the famous lake.

The reason? After a 20-year drought, the Sea of Galilee is 38 feet below its old fill mark!

Important information? In biblical times and in our own day, water is a matter of life and death in the Middle East.

This current drought has helped create the horrendous civil war in Syria. When Syrian farmers were left to deal with the drought on their own, they ran out of water and money in only a few years. Farmland turned to dust and 1 million people became refugees in their own country. This was the beginning of the civil unrest in Syria a decade ago.

In the meantime, Israel faced the same crisis. Yet today, Israel has an excess of fresh water because of its determination to turn ocean water into fresh water. 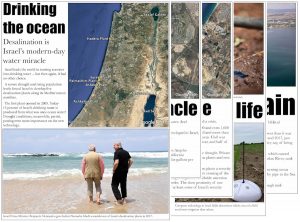 The modern-day miracle of Israel’s desalination technology is making an impact around the world, including in water-starved California.

This week’s EIN Photos of the Day will tell the story of this modern-day miracle. If you’re already getting this free resource, watch for five new photos this week, starting today.

Want to sign up? It’s free and takes seconds. Use the sign-up form you’ll find right here on our web site!