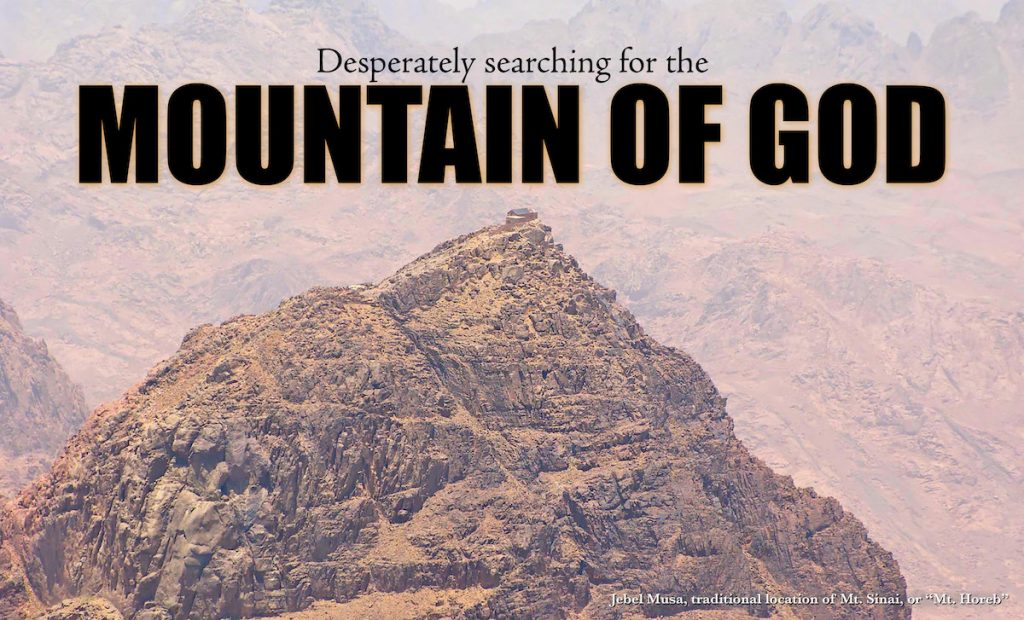 It goes without saying that Elijah was a man of the Text. One of the greatest prophets in the Bible, Elijah knew the words of Scripture by heart.

Therefore, when the day arrived when his heart was hurting, he knew exactly where he needed to be.

If you know the famous story of Elijah battling the prophets of Baal on top of Mt. Carmel, you know about the fire falling from heaven, the incredible victory for the prophet, and the race for the desert when Elijah realized he was a wanted man.

Instead of being congratulated for his faith, he was hunted by the faithless. He’d done nothing but good, but evil seemed to be winning. He was depressed, alone and exhausted.

But he wasn’t without direction. Instinctively, Elijah headed straight for the rugged mountains of the southern Sinai Peninsula.

Elijah “traveled forty days and forty nights until he reached Horeb, the mountain of God,” we read in 1 Kings 19:8-9. “There he went into a cave and spent the night.”

Ever been on a 40-day hike? I haven’t. Never been quite that motivated!

If Google Earth is telling me the truth, the distance from Mt. Carmel to the traditional location of Mt. Horeb in the southern part of the Sinai Peninsula is something like 350-400 miles. 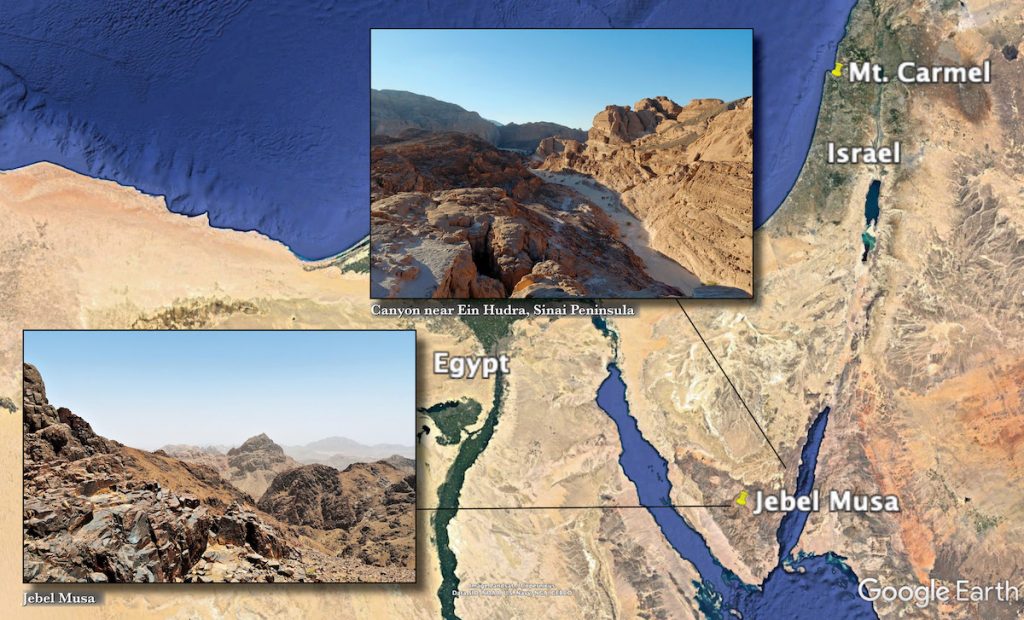 It’s hard to imagine how difficult the journey must have been for Elijah to the southern tip of the Sinai Peninsula.

Ever wonder why Elijah would go to so much trouble to reach a particular mountain so far away from home?

It wasn’t because he was afraid of those who wanted to kill him in Israel. He’d already been hiding successfully much closer to home for three years.

It was because he knew the Text.

Elijah knew that Moses had taken the children of Israel out of Egypt in a dramatic escape and met with God on top of Mt. Horeb. There Moses received the Ten Commandments and all the Law that would govern God’s people.

But on one desperate day, Moses had also asked for something more.

In an extremely stressful moment, Moses had longed to feel the presence of God. The people of God had been wildly rebellious. Blood had been shed because of their disobedience. More punishment seemed certain. In fact, a plague was already attacking the group. Worst of all, God had threatened to give up on those who’d just made their exodus.

“If your Presence does not go with us, do not send us up from here,” Moses prayed. “How will anyone know that you are pleased with me and with your people unless you go with us? What else will distinguish me and your people from all the other people on the face of the earth?” (Exodus 33:15-16)

In reply, God called Moses to the top of Mt. Horeb and told him to hide in the cleft of a rock. Once there, the presence of God’s glory passed by Moses. Never again did Moses ask for such a gift. Once was enough. Through all the trials that followed, Moses never again suffered from a fear that God might not be with him.

Elijah knew that story. He’d long ago memorized it. And every step he took toward the dramatic mountains of Sinai brought him one step closer to the hope that he might find the same peace. 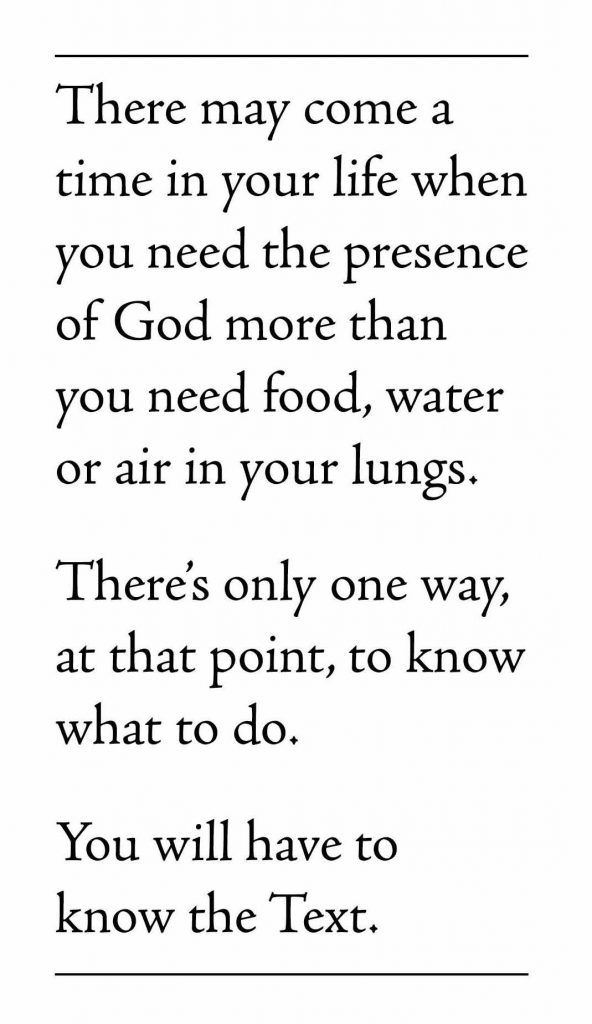 Elijah finally reached the mountain, climbed it and spent the night in a cave. When morning came, God spoke to the weary prophet and gave him the gift he wanted.

The presence of God passed by as Elijah stood at the mouth of his cave and covered his face in a glorious fear. It was a life-changing moment for a man who was already the undisputed champion of faith among his peers. Though he was deeply pessimistic about the future, Elijah returned to Israel and served God faithfully – and safely – until his days were done.

The story is in 1 Kings 19 and it’s one of the richest chapters in the Bible. The next time you read it, think of that 400-mile hike. Try to picture the demanding climb to a 7,500-foot-tall  pinnacle. Don’t forget the extreme weather conditions, either. Elijah’s path would have known a blistering sun in the day and a cold wind at night.

There may come a time in your life when you need the presence of God more than you need food, water or air in your lungs.

There’s only one way, at that point, to know what to do. You will have to know the Text.

Why read your Bible every day? Why keep attending church services, listening to sermons or reading books about the cultural and historical environment of the Bible?

Because if you don’t know where to go when you reach a point of spiritual desperation, you’ll certainly not get there.

It’ll be difficult enough if you have read the Bible.

It’ll be next to impossible if you’ve not gotten to know the God of Abraham, Isaac, Jacob, Moses and Elijah.

The stories of our Old Testament heroes set the stage for the greatest story of all, when God became one of us. Jesus spoke so clearly, everyone around him got the message. His words still show us how to have a peace that passes understanding and a life filled with joy despite any difficult circumstances.

But that’s only if you know his words.

That requires reading the Bible.

There’s certainly a Bible near you right now. Open it. Read a paragraph. Then read another. Start in Genesis, if you like. Flip over to Matthew and start there, too. Put bookmarks in place and pick up the path again tomorrow. Think of it as your own 40-day hike. Consider it the way you’ll climb the Mountain of God. Walk through the pages the way Elijah walked through the desert.

So find that Bible.

The presence of God is waiting.