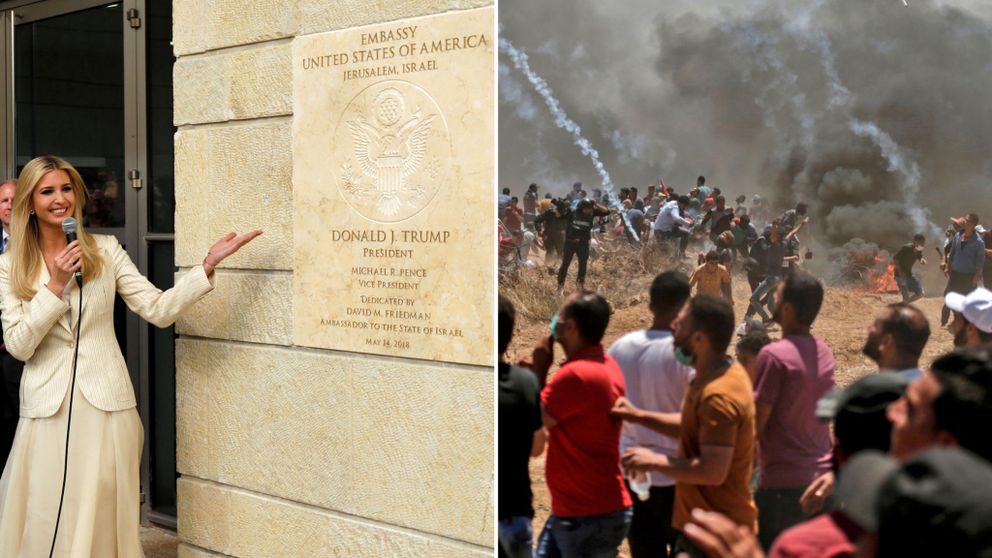 News media coverage of the US Embassy move to Jerusalem has focused as much on violent protests in the Gaza Strip as it has on the peaceful and monumental decision to recognize Jerusalem as Israel’s capital.

The news coverage today of the opening of the US Embassy in Jerusalem is nearly as important as the event itself. Millions of people will form an opinion today not on the facts of the situation, but upon the way those facts are presented by national and international news media sources.

Many news outlets continue to focus on the Gaza Strip as if the 1 million people who live there are equal partners in decisions made in Israel, by Israel. In plain talk, any non-resident of Israel is not an equal partner with the people who are citizens of Israel. But no doubt, many people watching the news today will assume Palestinians have somehow been unfairly left out of this decision-making process. To make matters more absurd, Israel didn’t make the decision to move the US Embassy to Jerusalem. The United States made that decision. Shall the United States ask the residents of Gaza permission of where we establish an embassy in other countries? Congress voted to move the embassy in 1995. If we’d moved it immediately, we wouldn’t be in this tragic situation today.

By its own choice in 1948, residents in Gaza and the surrounding area separated itself from Israel. Many others did the same thing. But the people of the Gaza Strip have been caught in a complicated trap of maintaining a hatred for Israelis and yet remaining in one of the world’s most crowded and tragic communities on the edge of an ever-prospering Israel. No one seems to know what to do with a people imprisoned by their own boundaries. But this is not Israel’s responsibility.

In free elections held in 2007, the people of Gaza elected Hamas leadership, which still rules the tiny area today. Israel not only soundly rejects the idea of ruling the Gaza Strip by force, it actually forcibly removed some small Jewish communities from the Gaza Strip in 2005. In short, the Gaza Strip is a completely different people group that has – for 70 years – actively campaigned for the destruction of Israel. It has fired thousands of missiles at nearby Jewish communities, dug miles of modern tunnels for terrorist purposes and even used children as potential martyrs in trying to win the sympathy of world opinion. It has used untold millions of dollars designated for humanitarian relief efforts to further its campaign of hatred. The Gaza Strip only has a voice in the international media because the international media seems obsessed with Palestinian “protests.” Sometimes I think that if you’ll throw a rock in Gaza, you’ll be on American TV tonight.

Israel is in a no-win situation when it comes to public relations over this matter. To most watching the news today, it must appear that Israeli soldiers are shooting innocent, unarmed individuals. In reality, Israel has continually warned protesters in the Gaza Strip that it will not allow a breaching of its border. Before today’s violence, Israeli jets dropped thousands of leaflets warning people that any effort to cross the border would be met with live fire. This has been the case in previous weeks. Therefore, no one inside the Gaza Strip could claim that Israel has killed or injured “innocent” civilians. There is nothing innocent about the terroristic attacks against Israel coming out of Gaza for the past two decades. What would happen if Israel simply allowed all those angry protestors to storm across the border? Any country faced with similar threats to its citizens would react with defensive measures, though no one – I hope – would celebrate the violence. Nevertheless, news coverage of the violence is painting the IDF as an oppressor and the protestors as victims. Our hearts want to protect anyone who is oppressed. But the people of the Gaza Strip are not being oppressed. They’re trying to influence world opinion about a matter over which they have no control, nor any right to control.

Some of the media bias is especially offensive to evangelical Christians. This includes a repeated labeling of the pastor of First Baptist Church in Dallas as “controversial.” A conservative Christian, Robert Jeffress continues to insist that salvation is available only through Jesus Christ and that homosexuality is an immoral activity. His role in the embassy opening was saying a prayer during the ceremony. Pastor John Hagee is also “controversial” because of his pro-Israel stance. Like it or not, the views of Jeffress and Hagee come straight out of the Bible and are considered standard fare in countless churches across the world. Media coverage of prayer at this embassy opening is nothing short of a continuing effort to brand conservative Christian beliefs as offensive and immoral. Here’s a nice question: Did CNN cover any other prayers this weekend? Shall we expect a new, “prayer-beat” from ABC from this day forward?

Finally, the consistent message from the media in recent months is that the Embassy move will destabilize the Middle East peace process. My question: “What peace process?” The Syrian Civil War has, at times, seen 5,000 deaths a day. Iran hoodwinked Barack Obama into a “peaceful” nuclear deal but never backed away from its intentions to develop nuclear weapons or continue to financially support terrorism in Syria, Lebanon and the Gaza Strip. By the way, the idea of a nuclear Iran was just as frightening to Muslims of differing sects as it was to Israel. Saudi Arabia, for instance, was delighted that Trump canceled the deal. I’ll ask again: How can a symbolic move from the United States possibly “disrupt” the Middle East any more than it is already disrupted?

On the other hand, Israel has become a good neighbor to its former enemies who’ve decided to recognize the Jewish state and give up efforts to destroy it.

Jordan, which once kept all Jews out of Jerusalem, now benefits from an agricultural partnership with Israel and still rules the Temple Mount in Jerusalem at Israel’s request.

Palestinians in the West Bank and Gaza Strip were part of a celebratory announcement on July 13, 2017, when a landmark water deal was announced. Israel’s desalination technology was the key to that breakthrough. The deal will eventually provide fresh-water relief to the Gaza Strip, which has been in a water crisis for decades.

Egypt, which twice has led multi-national attacks against Israel, now enjoys air support from Israel in its fight against ISIS and other terrorists in the Sinai Peninsula.

Inside Israel, Arab Israelis also benefit from the democratic government and free-enterprise economy. Israel’s Knesset – its ruling body – has Israeli, Arab, male and female representatives. The small state is far from perfect … but you won’t find more democratic ideals in any other Middle Eastern nation. In the Middle East, only Israel has such a high regard for men and women and people of different ethnic and religious backgrounds.

Israel has also quietly been providing medical and humanitarian relief to starving Syrian refugees. Even the UN has recognized Israel’s generous aid to victims of natural disasters around the world, calling Israel’s field hospital capabilities the best in the world.

As for Jerusalem, only under Israeli control has the city been open to Jews, Christians and Muslims. If for no other reason, the world should recognize Jerusalem as Israel’s capital.

Imagine a world that simply recognizes Israel’s right to exist. Imagine the Middle East if Israel was recognized as a good neighbor, instead of an enemy. If that’s ever going to happen, then Palestinians and Islamic countries in the Middle East must admit that Israel has survived, thrived and has a historic claim on Jerusalem that far outdates any Islamic claim to the city.

So now the US Embassy is in Jerusalem. Other nations will eventually follow the American lead. And in time, the uproar will die down, just as it did after the stunning Israeli victory in the Six-Day war 51 years ago.

This move to Jerusalem was necessary and long overdue.

Now it’s time to pray for the peace of Jerusalem, no matter what message the international media projects.