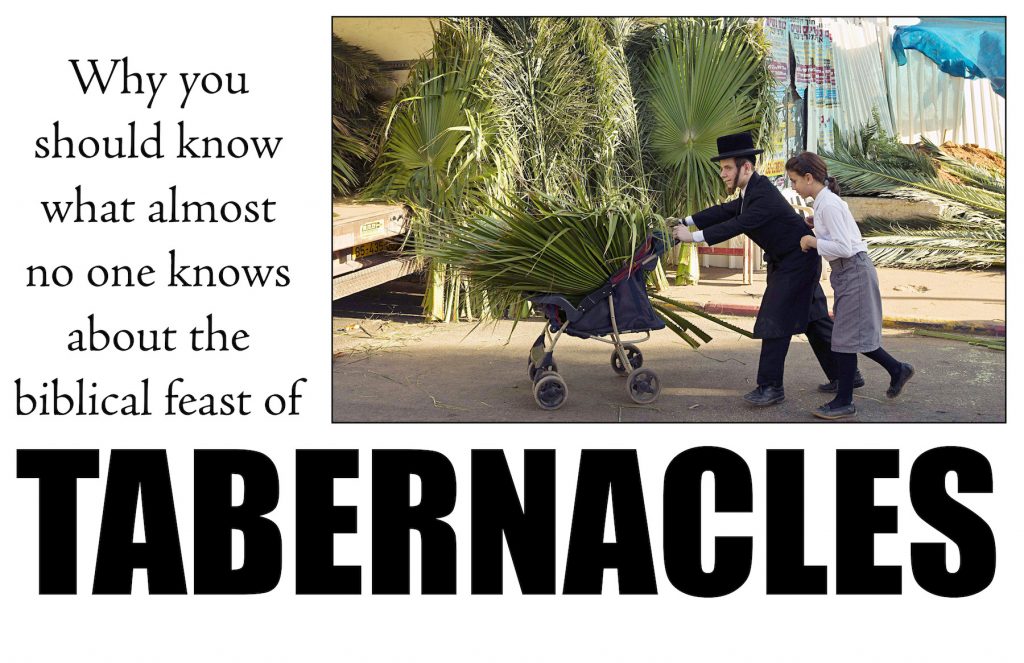 Of all the biblical holidays, one stands alone as the least-known among Christians.

That’s too bad, because hidden in the leafy branches of Sukkot are some incredible images.

“Sukkot” means “tabernacles,” “shelters” or “booths,” but you might relate more to the concept of camping in the back yard with your kids. In fact, some Jewish families will, indeed, spend the night in their lean-to shelters over the next few days, making the holiday especially memorable for young children. Many, many more families and groups of friends will have meals in their temporary “booths.”

It’s all a part of Sukkot, the “Feast of Tabernacles” that begins at sunset today and continues through next Sunday.

When Moses led the people out of Egypt, they lived in temporary shelters for 40 years. Thus, part of Sukkot is simply remembering that chapter of Bible history. The shelters are simply a way of remembering the story.

It’s also the end of the year, and Sukkot serves as something of the Jewish version of “Thanksgiving.” Only thing, instead of feasting for only one day, they eat like kings for seven straight days, even eight!

And since the rainy season is due to come every winter, the fall-seasoned Sukkot provides an opportunity for the people to pray for rain. If you’d lived in the days of the Temple, you’d have heard a lot of “Lord save us!” songs on the Temple Mount. In our language, it would have sounded like “Hosanna!”

Ready for some cool connections to Jesus?

Start with John 1:14, part of the mystical-sounding beginning of John’s Gospel. “The Word became flesh,” John wrote, “and dwelt among us.”

Could it be the birth date?

The word for “dwelt” is better translated “tabernacled,” which obviously makes no sense to English-speaking Bible readers in a 2018 culture.

John was almost certainly drawing from his own Jewish experiences and connecting the idea of Jesus living among us with the intimate memories of his family spending time together in one of the temporary shelters. If you ever had the chance of enjoying a family camping trip, perhaps we’re connecting how John felt about spending time with Jesus. He loved it!

So was John giving us a hint that Jesus was born during the Festival of Tabernacles? It’s possible, but don’t get too excited. The festival covers an eight-day span and bounces around the lunar-based calendar so much, you’ll never know exactly which day to send Jesus a card.

But the fall is the right season of the year for Jesus’ birthday. Shepherds would have still been in the fields in the fall,[1] so perhaps John 1:14 is, indeed, pointing to the season when Jesus was born. Remember, Jewish people living in New Testament times didn’t do birthday celebrations. John, I think, would be mystified as to why we’d even want to know such a detail. Above all else, he wanted us to know Jesus and find the life he offered.[2] A detail like the birth date of Jesus? It would have never occurred to John to pass such a trivial thought along.

My favorite scene from Tabernacles comes from John 7.

The story begins, “When the Jewish festival of Tabernacles was near …” and includes a bit of subterfuge on the part of Jesus. He sneaks into Jerusalem unrecognized and doesn’t start teaching until midway through the big week.[3]

By this time, Jesus had become a real thorn in the side of the Jewish leaders. Remember, the top echelon of leadership at the Temple was in bed with the Romans and about as corrupt as any group of leaders in history. There were bribes, payoffs and murders. The position of high priest was for sale to the highest bidder. This left the high priest in great debt to the Romans. Little wonder he and others like him were so determined not to let someone like Jesus rock the boat.

Jesus, however, was a boat rocker of amazing talent.

So was John, the baptizer. His blistering sermons about the “brood of vipers?” It was aimed straight at the Jerusalem leadership. Little wonder he did his preaching so far from the Temple. That would have been dangerous to the point of being life-threatening!

It’s no surprise that the Jewish leaders were intent on stopping Jesus. They even tried to arrest him at the Festival of Tabernacles.

But no one had anticipated the shocking thing Jesus was about to do.

A bit of background is necessary before you can see the scandal of what happened.

When the Festival of Tabernacles concluded each year, everyone in Jerusalem made it to the Temple Mount. With songs of “Hosanna!” echoing across the hills, people crowded in by the tens of thousands. No one wanted to miss the big conclusion. Ever been to a college football game where 100,000 or more frenzied fans realize the game will be won or lost on the final play? That’s the passion you would have found on the Temple Mount on the last and biggest day of Sukkot.

During the final celebrations, the high priest, wearing his royal robes, led a procession to the Pool of Siloam, where he filled a beautiful container with water. Then he led the parade back up the hill to the Temple Mount.

It’s a third of a mile to the Siloam pool, and down a very steep hill. No doubt, the man in charge was sweating and pretty winded by the time he returned to the Temple.

When he arrived, however, the crowd took the noise up a notch, singing and beating their dried-out collection of leafy branches on the stone floor. It was as if the entire city was trying to show God how passionately they were praying for rain. With all of those dried leaves waving around and hitting the floor, it even sounded like rain.

Why all the prayer for rain?

In the desert, water is life. Stand in Jerusalem just one time and you’ll see the obvious. This land is surrounded by rugged desert. The farmland? It’s just one dry season away from complete ruin.

The high priest, then, has a very important task. His way of leading the people in a prayer for rain is to take that precious container of water up to the high altar and pour it out before the Lord.

Only then does the Temple Mount fall quiet. Only then could a single man be heard above the cries of thousands.

So listen to this as if you were there, finally in that silent moment after an hour of frenzied screaming, shouting and singing. For a moment, all would be quiet.

On the last and greatest day of the festival, Jesus stood and said in a loud voice, “Let anyone who is thirsty come to me and drink! Whoever believes in me, as Scripture has said, rivers of living water will flow from within them!”[4]

If the moment looked like I think it looked, everything came to a crashing stop.

The crowd was distracted from the big ceremony.

Guards scanned the crowd, looking for the disrupter.

The high priest still held the water vessel high, ready to pour out the precious water on the altar. Only a second ago, all eyes had been on him. But his big moment had been stolen by a rabbi who’d finally crossed the line. No one was looking at the high priest. The ceremony was ruined. The ritual was interrupted.

“That man,” the high priest would be thinking, “has got to die.”

Jesus slipped away, despite the efforts to seize him.[5]

And the high priest started campaigning for Jesus’ death.[6]

He’s either crazy … or he is who he claimed to be.

In Jewish life, no holiday is more important than the weekly Sabbath. Jesus said, “I am Lord of the Sabbath.”[7]

The Temple in Jerusalem may have been the most beautiful building in the world. The activity that happened there was the most important activity in Jewish life. “I am greater than the Temple,” Jesus said.[8]

The world’s most symbolic meal is Passover. Jesus took the bread and wine of that meal and said, “This is my body … this is my blood.” In other words, “This is about me!”[9]

He used the very language of God speaking from the burning bush, saying, “Before Abraham was, I am!” Little wonder those who heard him tried to stone him on the spot![10]

And at the Feast of Tabernacles one year, Jesus stole the spotlight from a very corrupt high priest, saying, “If you’re really thirsty for a relationship with God, come to me!”[11]

Some would call Jesus a “good teacher.” Indeed, he could teach like no other man. But only a good teacher? No way.

Some would call Jesus a failed political leader, a rebel whose cause died with him on the cross. If there were those hoping Jesus would lead a rebellion, they were surely as disappointed as suicidal Judas.

And some would say he was simply insane.

But what if he was right? What if it was all about him?

If so, Jesus has the only water that will ever quench your spiritual thirst.

If so, Jesus is the only light that will ever show you how to walk through the darkness.

If so, Jesus is the way, the truth, the life … the only possible way to get to the Father.

Sukkot – the Feast of Tabernacles – is your invitation to get into his booth, under his shelter, and enjoy the most amazing relationship you’ll ever discover.