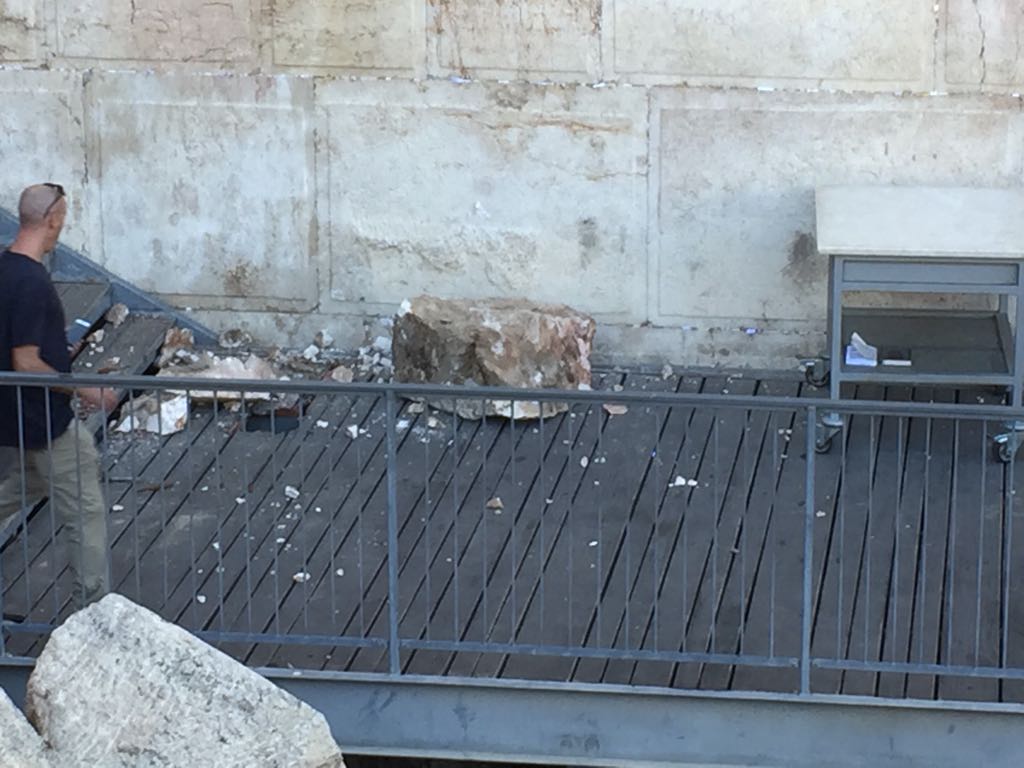 A bystander looks at the boulder that fell out of its place in the Western Wall on Sunday.

It’s a little strange being thankful that no one was praying at a particular place on a Sunday morning, but for once, it makes sense.

It doesn’t happen often at the Western Wall (thank God!), but on Sunday, a 220-pound stone shot out from the wall and crashed to the platform below.

The area in question has recently been declared an area where men and women have been allowed to pray together.

This, of course, led to a great deal of anguish among some of the Orthodox Jews, who have begged the Almighty to never let such a thing happen. They’ve been quick to interpret the stone falling on the new area as being an answer to their own prayer, and a warning to the rest of us to pay attention. Men and women, you see, should not be praying together!

I don’t think my wife is going to be pleased with this development.

Cell phone video captured the perfect moment when a 220-pound stone from the Western Wall came loose and crashed to the platform below it.

The stone also fell to the ground only one day after the annual “Tisha B’Av” mourning for the destroyed Jewish temples. The Western Wall is part of the retaining wall of the huge Temple Mount.

This caused the chief rabbi at the Western Wall to call all to deep reflection on the somber remembrance of the days when the actual holy sites were destroyed, stone by stone. His warnings were broadcast by national media to Jews across the land.

An Islamic news organization immediately tweeted out its suspicion that “Israeli excavations” had caused the stone to dislodge. Unfounded conspiracy theories of Jewish efforts to destroy the Al Aqsa Mosque have been around for years.

In reality, when the Muslims secretly enlarged the mosque underground in the late 1990’s, they moved so much dirt, so carelessly, the southeastern portion of the retaining wall bulged dangerously and took four years to repair. If anyone has actually tried to drop the mosque into the dirt, it’s been the group enlarging the building! Nevertheless, Sunday’s loose-tooth stone episode was apparently “evidence” that the Israelis are “again” trying to destroy the mosque.

On a side note, archaeologists are still sorting through the dirt that was careless dumped by the Al Aqsa expansion. If you’ve not read of the Temple Mount Sifting Project, do so. And if Muslims wanted to deny a Jewish presence on the Temple Mount from the biblical era, dumping 9,000 tons of artifact-rich soil into the Kidron Valley backfired badly.

But back to prayer.

Also on Sunday, 1,440 Jews visited the Temple Mount itself, a record number on Tisha B’Av. On a typical day, very few – if any – Jews visit the Temple Mount. Some 15 of the Jews were arrested, at least one for prostrating himself in prayer.

A spokesman for the Palestinian Authority called it a “dark day in the history of Jerusalem and Palestine.” A Jordanian minister criticized the actions of “extremists.” They had, he said, violated the sanctity of the holy place.

Who knew prayer could be so offensive?

I think it might be a good idea to take anyone offended by people praying – whether they are male, female, Jewish, Muslim, Christian, whatever – and make them sit together where Sunday’s rock fell. At the moment, no one knows if there might be another wayward boulder in the works.

Yes, let’s put them all there. Let them look up, occasionally. Let a little loose dirt fall down, from time to time, reminding them that God’s rock-hard judgment could (and will, one day) fall on the judgmental.

Maybe then, the real message of a 220-pound warning shot might sink in.

And you know what? 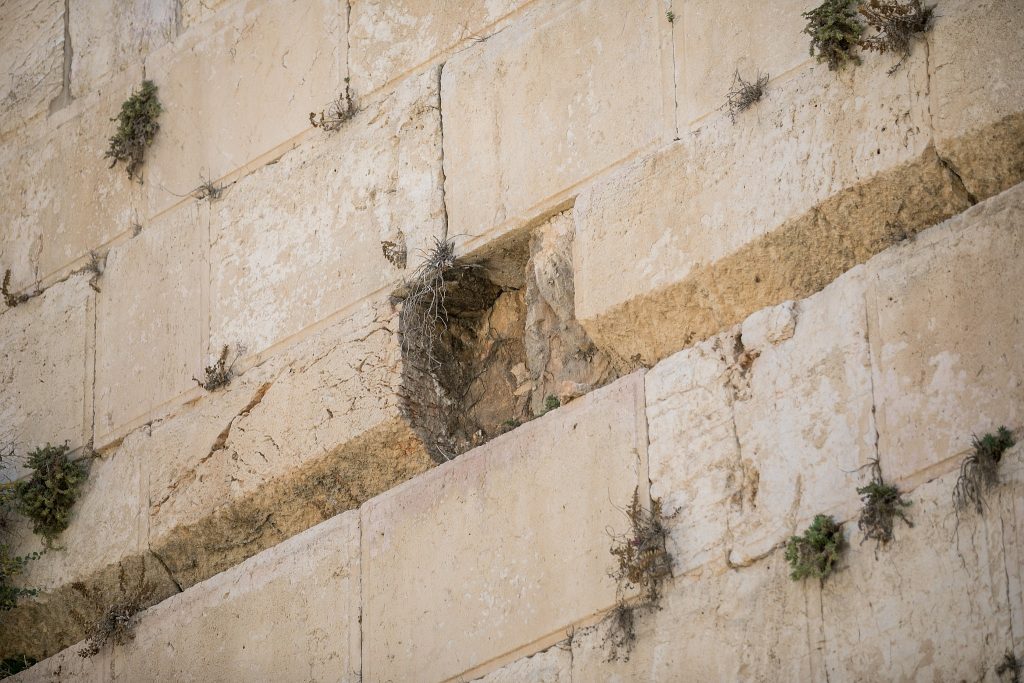 Experts believe a vine growing in between stones led to natural erosion, eventually causing Sunday’s boulder to lose its grip on the Western Wall.