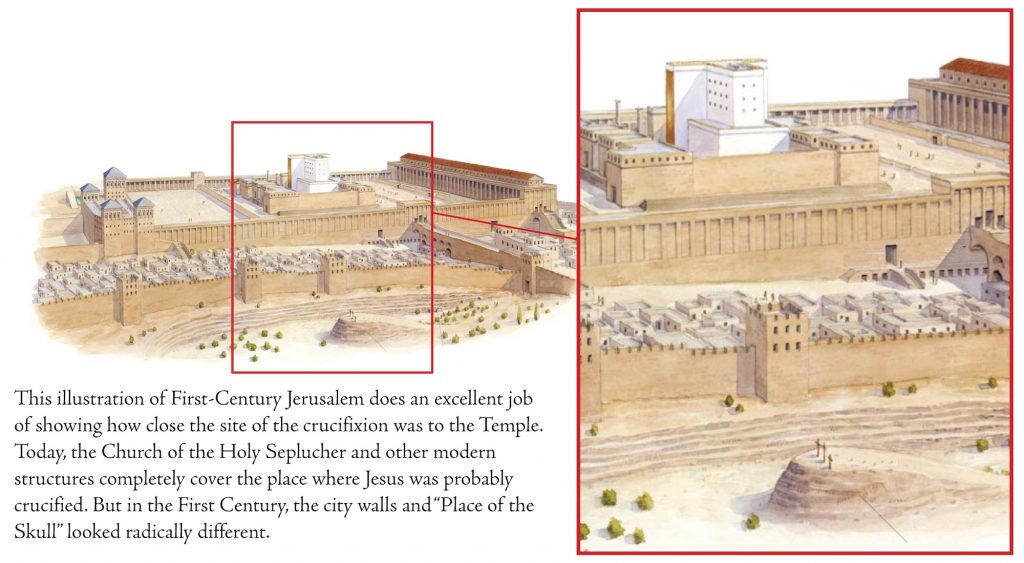 When either of the sacrifices took place, a great blast from a shofar was trumpeted from the southwest corner of the Temple Mount. We actually have archaeological evidence of where the trumpeter stood. From his vantage point, everyone in the ancient city and those near its ancient walls would have heard the eerie sound of the ram’s horn reminding them that God demands a very high price for sin. It happened every morning. It happened again every afternoon. If nothing else, the rituals at the Temple were punctual.

So consider the parallels. At 9 a.m., a priest took the life of a lamb at the great altar in front of the Temple, asking God to forgive the sins of His people. At the same time, Jesus was nailed to the cross. Do you remember his first words? “Father, forgive them, for they do not know what they are doing.” (Luke 23:34)

Ironic, wouldn’t you agree? As a priest performed a bloody act of sin-sacrifice just a short distance away, Jesus literally prayed that the Father would forgive the people who were in the process of taking his life.

And at 3 p.m., another lamb died as Jesus neared the last few moments of his horrible ordeal.

According to a note in the insightful NIV Cultural Backgrounds Study Bible, it was also part of the First Century tradition for the priest in the Temple to quote Psalm 31:5 as he again asked God to forgive his people as he took the life of an innocent lamb.

Listen again to the familiar words.

But this time, realize that they were an exact copy of what you would have heard at the Temple that dark and terrible afternoon.

Luke tells us that Jesus didn’t whisper the words. He screamed them. And once they were said, he died.

Just then, a trumpet blast sounded loud and clear over all Jerusalem.

And all Israel took comfort in knowing that a lamb had just given its life for the sins of God’s people.

[1] Your Bible might call these times “the third hour” or “the ninth hour.” Scholars tell us this time-keeping language apparently began at 6 a.m. So three hours into the day would be 9 a.m. and the nine-hour mark would be 3 p.m. Many translations forego the math and simply present the time of day.