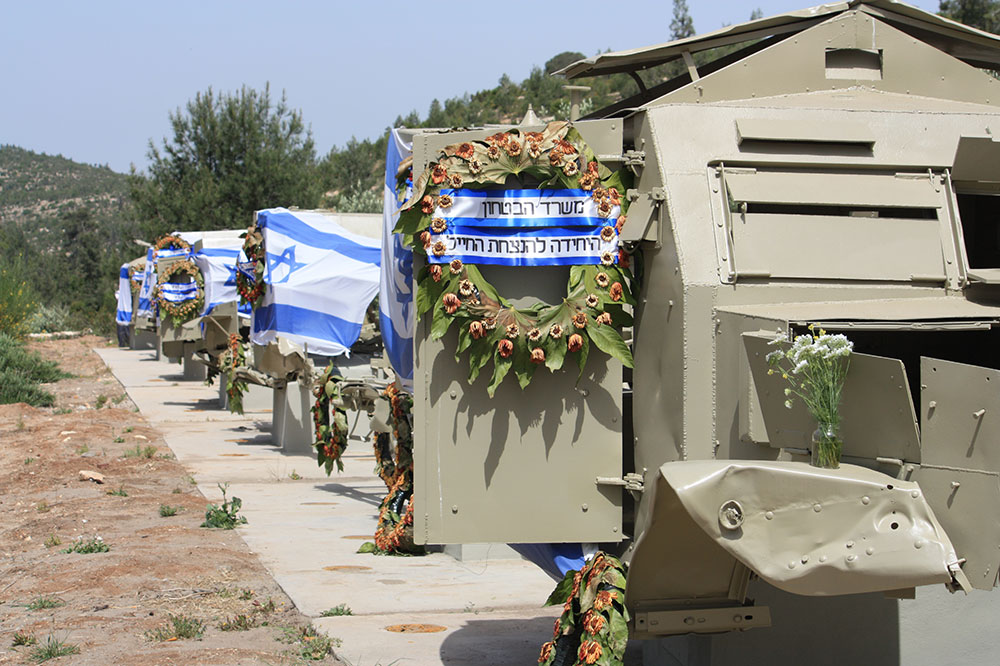 These war-damaged frames of small armored vehicles alongside Highway 1 are decorated in celebration of Israel’s 70’s birthday. These trucks led the way through the treacherous hills that lead from Tel Aviv to Jerusalem in 1948.

When tourists visit Israel, one of the first things they are likely to see are four groups of what appear to be junked truck frames alongside the main highway linking Tel Aviv and Jerusalem.

Few people know the story of why the metal frames have been carefully preserved for the last seven decades.

When modern-day Israel declared its independence on May 14, 1948, getting supplies from Tel Aviv to Jerusalem was critically important.

For several months, a small group of Jewish fighters struggled to hold the Jewish Quarter in Jerusalem’s Old City. They were vastly outnumbered and in constant need of food, water, ammunition, medical supplies and new troops. If they were going to survive, it would be because ordinary citizens in Tel Aviv would keep the supply chain moving.

At first, supplies were carried into the mountains one car at a time. Then small convoys were arranged. Eventually, armored trucks escorted long lines of vehicles trying to get supplies up the winding roads and into the Judean Mountains.

The challenge of reaching Jerusalem, which was perched at the top of the mountain range, lay in the narrow passes well below the city. Arab fighters could block the road or simply wait on the slow-moving convoys to reach the most difficult areas of climbing.

As the vehicles slowed or came to a complete stop, enemy fire rained down upon the nearly defenseless drivers. More than 400 men and women were killed in those narrow passes.

More than 3,100 trucks made the terrifying trip during the early months of Israel’s War of Independence, carrying more than 10,500 tons of supplies. On some of the longer convoys, the first trucks reached Jerusalem before the last trucks in line had even begun to move!

Eventually, the ambushes in the narrow passes became so deadly, the convoys along the main road were halted. The Jewish Quarter in Jerusalem was lost, not to be regained until the Six-Day War 19 years later.

As a reminder of the terrible price paid by so many of Israel’s first citizens, some of the frames of the destroyed armored trucks remain beside the main highway today.

Amazingly, and despite the loss of Jewish Jerusalem, those early fighters held on to win that War of Independence. The Six-Day War reunified Jerusalem and opened the city to people of all faiths.

Though still surrounded by enemies who have sworn to destroy it, Israel today stands as the strongest military force in the Middle East.

How difficult it is to imagine the precarious, earliest days of Israel’s existence now! 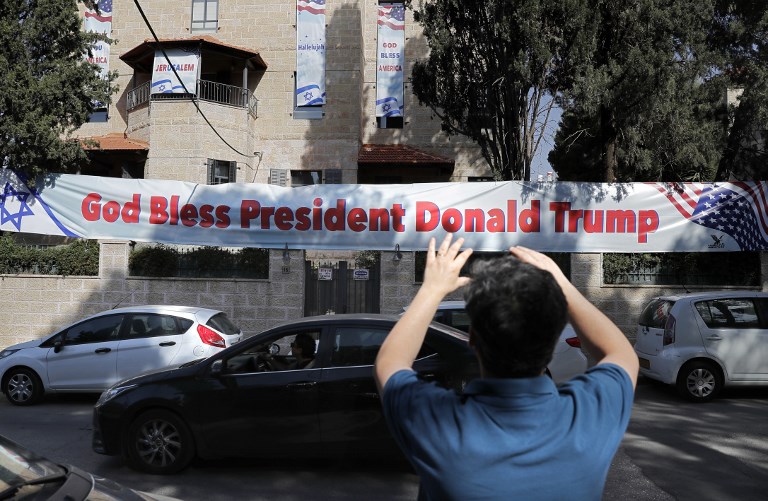 An Israeli man takes a picture on May 11, 2018 of a poster placed near the compound of the US Consulate in Jerusalem. On Monday, May 14, 2018, the building will become the new office of the US Embassy. Click on the photo to read a story in The Times of Israel about the Embassy opening. AFP PHOTO / AHMAD GHARABLI

Today’s Jerusalem not only has a vibrant Jewish Quarter in the Old City, but more than 500,000 Jewish residents live in the more modern neighborhoods of Israel’s capital. Another 6 million Jewish residents live in the remaining areas of Israel, along with nearly 2 million Arab residents who are also Israeli citizens. And contrary to news reports that consistently focus on any and every conflict, the small nation lives in a general state of harmony and safety.

And Israel’s positive impact on the world is mind-boggling.

Cell-phone and computer technology has often been first created in Israel. If your computer says it has “Intel Inside,” for instance, it’s actually saying that you’ve got “Israel inside!”

With only one-sixth the land mass of Georgia, Israel has created cutting edge farming technology to maximize every fertile acre. This technology is also transforming arid lands in Jordan, Egypt and the West bank.

This includes the important work of turning sea water into usable water for farming and consumption. In the Middle East, water is the most important natural resource, and Israel is sharing this desalination technology with the very nations that once swore to “sweep Israel into the sea.”

Israel’s scientists and technicians have also made critically important contributions in the fields of pharmacy, solar power, genetics and cancer research and of course, military engineering. Little wonder that 22.5 percent of all Nobel Prizes have been awarded to Jewish individuals, even though the percentage of Jewish people as a people group is only .2 percent of the world’s population!

I recently visited the property where the US Embassy will soon be established in Jerusalem. What pride I felt in knowing that the United States is finally making this symbolic move!

Though much has been made of President Trump’s decision to move the Embassy from Tel Aviv to Jerusalem, Congress actually passed a law that ordered the move in 1995. Trump has simply been the first President to stop the delays that have prevented the move. All of the Presidents before him – Bill Clinton, George W. Bush and Barak Obama – signed a waiver delaying the move every six months.

Opening the US Embassy in Jerusalem is an amazing way to celebrate Israel’s birthday. How appropriate that when US Ambassador David Friedman makes the move on Monday from Tel Aviv to Jerusalem, his motorcade will pass by a dozen metal frames that still guard the highway leading into the mountains.

Click here to read a story about the Embassy opening in The Times of Israel.